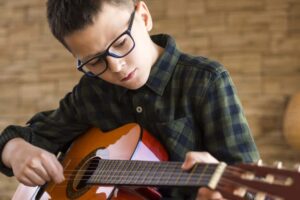 Learning guitar can be a lot of fun, especially for kids who are in love with the instrument. While it’s important to learn the different notes and chords, the real fun of playing guitar comes from being able to play a song.

That’s why guitar teachers keep a list of simple songs that kids can learn to play early on in their lessons. These songs often challenge new players, so they’re also a great way for beginners to expand their skills and become more familiar with the guitar, whether they play electric or acoustic.

Here are some of these great songs that all young guitarists should learn.

Beginners should look for songs that have a fairly simple bass line or have a bass line that can be simplified. These songs can usually be played on the guitar’s sixth string instead of the normal strings they’re written for. Any song that doesn’t use many notes or chords also works very well for beginners.

Mary Had a Little Lamb

Mary Had a Little Lamb is a fairly easy song to learn in your private guitar lessons. It doesn’t have many notes or complex chords in it, which is great for beginners. It’s also a song that many people know, so most students are already familiar with the melody and the lyrics. While it might not be an impressive song to play for friends and family, it is a great beginner song.

Smoke on the Water

“Smoke on the Water” by Deep Purple has a riff that is incredibly easy to play, so it’s great for players who want to learn something “cool” early on. It can even be transposed up to the sixth string to help new players learn it more easily. This song actually holds a Guinness World Record for number of guitarists playing the same riff at the same time in the same place. Over 6,000 people played the song in Wroclaw, Poland, in 2009.

For What It’s Worth

“For What It’s Worth” by Buffalo Springfield is another great, easy song for beginners because all they need to know is four chords: A, E, C, and D. It’s even possible to play nearly the entire song in A and E chords by skipping over the C and D chords in the song’s chorus. As they progress, students can then add harmonics to the song, allowing it to evolve as their skills progress.

“Louie, Louie” by The Kingsman, a recognizable song from the 1960s, has a distinctive rhythm that can be transposed up to the sixth string to make it easier to play. This is another song that players can later add more and more as their skills improve.

Like “Mary Had a Little Lamb,” it’s also a song that many people know from childhood. “Are You Sleeping, Brother John?” is another good one-chord song that beginners can add to their lessons for some variety.

Once players have mastered playing songs that only use one chord, they can move on to songs that feature two chords. Most of these use the C chord and the G7 chord. They include well-known songs such as “The Hokey Pokey” and “Ain’t No Bugs on Me.”

A Great Teacher Has Many Songs Prepared

A great guitar teacher will have a number of different songs on hand that are perfect for beginners. They will work to match the music to the student in order to keep them interested in what they’re playing.

If your child is ready to learn guitar, Lessons in Your Home is here to help. Our teachers will come right to your home for every lesson, plus we virtual music lessons, too. However, our online music lessons are being taught by local music teachers with live lessons tailored to your child! Contact us today to discuss lessons.

5 Ways to Get the Most Out of Violin Lessons