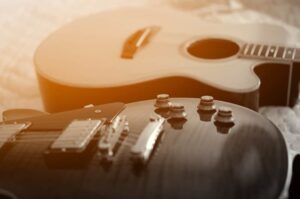 If your child is interested in playing the guitar, one of the first things they need to decide is if they want to learn the electric or the acoustic versions. While there are certainly a lot of similarities in the two, there are also some major differences.

Your child’s guitar lessons at home will start with the basics, which will be the same for both electric and acoustic guitars. However, it’s a good idea to know which instrument your child wants to learn so they can get off on the right foot and be familiar with their guitar of choice.

Another option is to start learning from your guitar teacher is on a classical guitar since the two are similar. Acoustic guitars are fairly lightweight, but they are also somewhat bulky.

What Kind of Music is Best for Acoustic Guitars?

The acoustic guitar is ideal for those who want to play country, folk, pop, and slow rock music. This type of guitar is less complicated than an electric guitar. That makes it fairly easy and simple to learn.

Electric guitars, on the other hand, are smaller than both classical and acoustic guitars. This makes it easier for a child to play them.

If your child is a teen, though, electric guitar shouldn’t be a problem at all. Some younger players may also be able to handle an electric guitar. It’s a good idea to have them hold one and see how comfortable they are with the instrument before buying it.

What Kind of Music is Best for Electric Guitars?

The electric guitar is perfect for rock, pop, some country, and metal. Electric guitars share many things with the acoustic version.

However, unlike acoustic guitars, you can connect your electric guitar to an amplifier. There is a small connector on the body and a few volume and tone controls. This makes the electric guitar look a little more complicated, but it’s really not. You play the guitar in exactly the same way. The only difference is that you need to adjust the volume and the tone of the amplified sound before you start playing.

Is an Electric Guitar More Expensive than an Acoustic Guitar?

Most people assume that an electric guitar is more expensive than an acoustic guitar. This is true, but it’s mostly due to the price of the amplifier. You can usually purchase an acoustic guitar, a stand, a bag, some extra strings, and some pics for $200 or less.

For an electric guitar, you can spend as much as $400 for a basic instrument, amp, and a few other accessories. In fact, it’s easy to spend $400 on the amp alone. That’s not to say there aren’t less expensive, basic versions out there for beginners—there are. Just be ready to spend a little more if you’re going the electric guitar route.

Which Guitar is Better for a Beginner?

It really comes down to what type of guitar your child wants to play—learning the basics of guitar is going to be the same no matter which type of instrument they prefer.

Some people start out on acoustic and later switch to electric and vise-versa. Because of its lighter weight, though, many young players start out with an acoustic guitar.

If your child is ready to begin their guitar lessons, give us a call today. We’ll set you up with a top guitar teacher in your area.