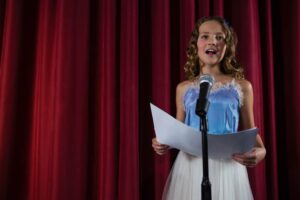 If your child loves their singing lessons and has started performing, it’s possible that they’ve realized they love the stage and being the center of attention that comes with performing.

What shows are out there that will accept young singers? There are four options to choose from.

Singing Teachers who come to your home!

Meet our singing teachers and see if we serve your area.

American Idol is one of the longest-running and most well-known singing competition shows. It’s what made Ryan Seacrest a household name and made people love (and hate) judge Simon Cowell.

Since its premiere in 2002, its winners have gone on to become well-known, successful music artists. A few of the people who walked away with singing careers following their appearances on the show include Kelly Clarkson, Clay Aiken, Carrie Underwood, and Jordin Sparks.

To be eligible to compete on American Idol, a contestant has to be at least 15 years old. Before making it on the show, they go through a series of auditions. Those who make it to Hollywood and win the title of American Idol receive a record deal and management contract.

The Voice has been on television since 2011 and is part of an international franchise. The panel of coaches has changed since the series started, but the show has had some major names over the years: Gwen Stefani, Christina Aguilera, Blake Shelton, Miley Cyrus, Usher, and Shakira have all served on the coaching panel.

The chance to work and learn from some of the best in the music industry is certainly a huge draw for singers. Those who win join an exclusive club alongside past winners, including Danielle Bradbery, Javier Colon, Jake Hoot, and Chris Blue.

The Voice accepts contestants as young as 12 years old, and they have just as much of a chance as winning as anyone else. Brynn Cartelli, winner of season 14, was only 15 at the time. Winners of The Voice receive a record deal with Universal Music Group and $100,000.

America’s Got Talent isn’t strictly a singing competition, but singers have certainly done well on the show. It was created by American Idol judge Simon Cowell, who has served as a judge alongside celebrities such as David Hasselhoff, Sharon Osbourne, Mel B, Heidi Klum, and Howie Mandel.

The idea is that anyone with talent can compete, so singers are going to be up against a wide range of other types of performers. Past winners have included comedians, dog trainers, and magicians, and even ventriloquists, though singers have claimed the most wins.

To get on America’s Got Talent, a contestant has to advance through a series of auditions before they make it to the live competition. Making it through and winning secures $1 million dollars, plus the chance to headline a show in Las Vegas. Many musically talented winners and runners-up also went on to sign with recording companies.

The show has no minimum age, but minors must have their parent’s permission to compete.

Songland is the latest competition show for songwriters. It debuted in May of 2019 and is designed for songwriters, not for singers. If your child has written their own music, they’ll have a chance to sing original pieces in front of a panel of coaches and a well-known artist.

The guest artists listen to the songwriter’s work and decide which one they’d like to record themselves. It’s a great chance for singer-songwriters to get their names out there so that later on they can record their own songs.

It’s also a good venue for those who enjoy writing music, but not necessarily performing. In fact, in one episode, musical guest Charlie Puth selected Zach Sorgen’s song as the winner, but declined to record his own version of the song, saying Zach should record and release it himself.

To compete in Songland, contestants need to be 13 years old. Each episode features four songwriters competing against each other, so there’s a winner every episode rather than one per season. Each episode’s winner will have their song recorded and released by a professional singer. The musician changes every episode, but season 1 included John Legend, Megan Trainor, the Jonas Brothers, and Leona Lewis.

Singing Lessons Provide the Foundation for Winning these Shows

Your child may have big dreams of winning a show, but first they have to be the best singer they can be. That means starting off with vocal lessons from a trained singing coach. Our teachers will come right to your home for every lesson, plus we virtual music lessons, too. However, our online music lessons are being taught by local music teachers with live lessons tailored to your child! So whether you’re looking for online instructors to teach Atlanta voice lessons or if you want Houston voice lessons, we got you covered!  Contact us today to learn more.