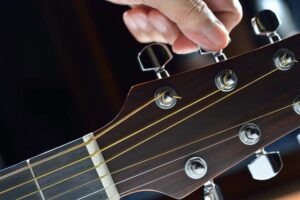 If your child wants to start playing the guitar, there are a number of different terms they need to be familiar with. Many of these terms will be taught during their guitar lessons in Denver,  but if they learn these terms early, they will have a head start on their lessons.

Here are a few of these terms that can help any young guitar player learn more about their instrument of choice.

A chord is simply playing more than one pitch sound at once. As taught by your guitar teacher, you strum several of the strings, combining those notes to create a new sound. It’s simple, and one of the earliest things most players do is learn the basic chords. Once they do, they can begin playing any number of songs.

One of the first things your child will learn on private guitar lessons is how to tune their guitar. This involves adjusting the strings until they make the right sound. Thanks to electronic tuners, it’s very easy to tune a guitar now. There are even apps for smartphones that let players tune up their guitar, so there’s no need to carry a tuner anymore.

The tabs show a player where to put their fingers on the neck of the guitar. They tell players the melody and other advanced parts of songs. Each line on a tab is a string, and the numbers show where players put their fingers.

The fretboard diagram shows how to play chords. The top line of the diagram is the nut, and each line under it is a fret. The vertical lines on the diagram are the strings (six for a traditional guitar). Each dot tells a player where to put their fingers. If there’s an “o” on the fretboard, it indicates an open string. You can find fretboard diagrams for any chord online, so your child can learn any chord they want just by searching for it.

But how do players know what chords a song uses? They look at the chord symbols on the sheet music. These symbols indicate the chord and any variation of the chord that may be used in the song. Some songs use fairly simple chords, while others may have a larger list of complex chord symbols.

An open chord, unlike standard chords, is played with the open strings indicated on the fretboard diagram. These chords are the easiest ones for your child to learn, so they’re usually learned first.

Barre chords, on the other hand, are more difficult to learn than open chords, but players who have mastered them can play many more chords. They’re played by placing the index finger over the strings.

When a chord is played, it’s usually strummed. This means the player runs their fingers or guitar pick down all of the strings in the chord at once. Most players strum from the top to the bottom, although there are other strum patterns that may be useful in certain songs or play styles.

Picking, on the other hand, is when a player plays a single string with their pick or fingers. The term “fingerpicking” is often used if the player is using their fingers rather than a pick. Picking can be used to play the melody or the notes of a chord in sequence instead of all at once (a technique known as arpeggio).

Is Your Child Ready to Play Guitar?

If you have a child who wants to learn guitar, you can start by helping them learn these terms. You can also contact us to arrange guitar lessons in your own home.