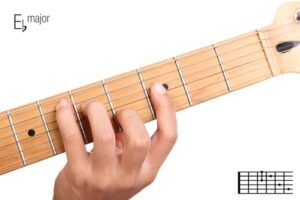 During private guitar lessons, you’ll spend a lot of time learning about the different major chords. Over time, each chord has come to be associated with specific meanings and even emotions.

The E-flat major chord, for example, has mainly been used in songs and music related to devotion and love. Others have used it in songs to convey a bold and heroic message.

Either way, the E-flat major chord is one of the most widely used and important chords in playing the guitar, piano, or any instrument. Let’s take a more detailed look at it.

Listening to these songs can help you learn to recognize the E-flat major chord. Soon, you’ll be able to pick up on any song written in this chord.

This major scale contains all of the pitches used in the E-flat major chords. They include E-flat, F, G, A-flat, B-flat, C, D, and back to E-flat.

Each of these pitches on the scale has a number. E-flat is number 1, followed by F as number two, and so on. D is number 7, and then the last E-flat returns to 1.

Every key signature in the chord has three flats in it, E, A and B. E-flat serves as the lowest and the highest pitch. Between each pitch is an active.

There are two types of chords you can play on the E-flat major scale. The triad is the simple chord that contains three pitches. Your guitar teacher will, surely, mention this.

You can build one of these triads on a scale degree. These triads create the pitches in the scale, including the bass notes. It may seem like calling them triads isn’t quite correct because each actually features four different pitches. For example, one triad in the E-flat major chord is F minor, F, A-flat, and C. Another is E-flat major, E-flat, G, B-flat.

There are also chords made up of four notes, which are more common in music. When looking at the E-flat major chords, there are eight of them made up of four notes. One such chord is D-minor seventh flat five: D-F-A-flat-C. Another is G minor seventh: G-B-flat-D-F. Some of these chords look a little scary, but with practice, any player can master them.

In addition to the three and four-note chords we will look at, there are also inverted chords. Generally, chords are found in one of three positions: root position, first inversion, and second inversion. When a triad is inverted, the notes are simply flipped so that the inversion has a different bass note.

For example, the chord E-flat-G-B-flat is a root position chord. When it’s in first inversion, the chord becomes G-B-flat-E-flat. In second inversion, it’s B-flat-E-flat-G. The notes stay in the same order, but the starting note changes.

For four-note chords, you add a third inversion. Again, the notes stay in the same order, but the starting note is changed for each position.

If you want to learn how the E-flat major chord on an instrument, why not start lessons? We offer music lessons right in your home so you can practice in privacy and comfort. Contact us today to learn more.