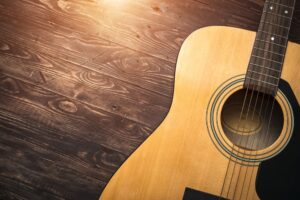 The acoustic guitar has a long and interesting history behind it. One of the most interesting fact is that no one is completely certain who created it! What guitar teachers, experts, and players do know, however, is that it’s a lot of fun to play.

If you’re in love with the acoustic guitar or if you’d like to give it a try, aside from having private guitar lessons, learning about the history of this fun instrument can be helpful.

So when was the first acoustic guitar made? There are several different theories. Some old carvings from Turkey suggest that there was an instrument similar to the guitar used over 3,000 years ago!

However, since we don’t have any hard evidence that these ancient guitars existed other than these images, we can’t really be sure that they were actually similar to our modern-day guitar. That’s why most people don’t count them and instead start in the modern age.

Here are a couple people who may have created the first acoustic guitar as it’s recognized today.

Around 1850, a Spanish guitar player named Antonio de Torres Jurado created an instrument that was shaped similarly to today’s acoustic guitars. He took the classical guitar that was in use in Spain and made changes to several parts of the guitar.

He utilized the basic guitar shape and gave it more definition, making the body wider and the waist section narrower. He added mechanical tuners in place of the wooden pegs that guitars had used up until that point. His guitars were also larger than the classical guitars other people were playing.

While his changes may seem cosmetic, in truth, they changed how people played guitar. He added fan bracing to the body of the guitar. This internal bracing kept the back and top of the guitar secure, preventing it from breaking. His changes also affected how the guitar sounded, giving it a louder, ticker, and richer sound that was also more resonant.

Christian Frederick Martin, a German immigrant living in the United States, may not have created the first acoustic guitar, but he is recognized as being the one to add steel-strings to the instrument.

Classical guitars at the time were using strings created from sheep intestine. But Martin began work on a steel-stringed guitar that would allow banjo players to switch to the acoustic guitar without any type of adjustment period. His guitar was in use by 1830.

In addition to the steel strings, he also made the top of the guitar flatter. This allowed it to be more easily played with a pick instead of the fingers. He also incorporated an X-brace into the instrument because the steel strings put too much pressure on the standard design.

The Two Types of Guitar Become One

While players in Europe and the East were using Jurado’s guitar, players in the West were using Martin’s. When European players came to the United States, they were surprised to see steel strings on the Americans’ instruments. The Americans, likewise, hadn’t seen some of the changes Jurado had made to the guitar structure.

Soon, different parts of these two designs were combined, creating what is today the modern acoustic guitar. Without Jurado or Martin, we wouldn’t have this unique instrument.

So, while we may not be certain when the first acoustic guitar was made, we know the modern-day version of this instrument can be traced back to 1850 with Jurado’s body changes and to 1830 with Martin’s steel strings. The two together can be thought of as the fathers of the modern acoustic.

Does your child want to learn to play the acoustic guitar? If so, contact us to discuss how our guitar teachers can help right in the convenience of your home.