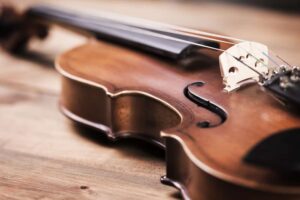 The violin is one of the most fascinating instruments. It has a very long history dating back centuries, and it hasn’t really changed that much since its invention.

Music teachers around the world have taught violin to students, and it’s one of the most popular instruments to play. Let’s take a look at this instrument and its extensive history.

When Was the Violin Invented?

The very first violin can be dated back to 1550 in Italy. Unlike some instruments, historians can’t identify any proto-violin or instrument that evolved into the violin. Instead, it seems that the instrument simply appeared fully formed.

Sadly, these early violins cannot be studied since they no longer exist. The only evidence we have that the violin was used so long ago is from paintings, including a painting by Gaudenzio Ferrari that is thought to show the first ever violin. This painting was likely created around 1535.

The oldest, created by Amati, dates back to around 1565. However, a record from 1523 from Savoy indicates a payment was made for “vyollons.”

Although the exact evolution of the violin is unknown, there are some instruments that are somewhat similar. The lira, for example, was shaped like a pear and played upright like a cello.

The rabab, a type of Arabian fiddle, and the rebec, a Spanish instrument, also share some similarities with the violin. The morin khur and the erhu, a Chinese instrument, were both based on the rabab, making them cousins to the violin.

The violin is also related to the fiddle, although there are some differences between the two.

Another potential relative is the viol. It was created in the fourteenth century and was popular for roughly three hundred years. In fact, the viol and the violin were played together in some orchestras. It did have some differences, such as a C-shaped sound hole instead of an F-shaped one. Plus, the viol also had more strings, a thicker body, and a fretted fingerboard.

Creation of the Modern Bow

While the violin dates back to the 1500s, the modern bow is a little more recent. It was created sometime around 1786 by Francois Tourte. He standardized the weight and length of the bow.

In 1820, the chin rest was created, making the violin more comfortable and easier to play. By the 19th century, the fingerboard and neck had been tilted slightly and lengthened so the higher notes could be played.

A heavier brass bar was also added to give the violin a bigger sound. Despite these changes, the violin still looks very, very similar to the instrument depicted in the early paintings by Ferrari.

The Violin’s Role in the Orchestra

The first chair violinist is typically seen as the second-in-command of the orchestra after the conductor. They are in charge of tuning the orchestra and lead the strings section.

This role dates back to the 17th century, when the violin became more prominent in the music of the time. Monteverdi, Vivaldi, Haydn, and Paganini all focused more on the string section than other parts of the orchestra.

These composers often made the violins the stars of their composition. This has continued today, making talented violinists some of the most renowned musicians in the world.

Ready to Learn the Violin?

Now that you know a little more about the history of the violin, are you ready to start playing? Learning to play this amazing instrument can give you a sense of accomplishment and a lifelong skill. Contact Lessons In Your Home today to learn more about booking violin lessons.

Violin Teachers who come to your home!

Meet our violin teachers and see if we serve your area.