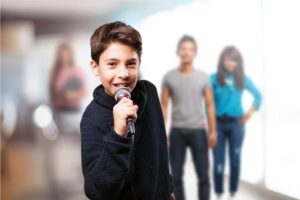 Many schools, camps, and other programs have talent shows as a way to let kids show off their unique abilities. If your child loves to sing, they may want to share this talent at the show. But what song should they sing? During their private voice lessons, your child has likely worked on a number of songs. They might want to go with one of those, or they may want to work on a new song. There are some great songs you’ll learn from your voice teacher that are almost always a big hit at a talent show. Here are a few different things to consider that will help your child decide what song to sing.

Voice Teachers who come to your home!

Meet our voice teachers and see if we serve your area.

A lot of people know or at least recognize songs that fall into the “traditional” category. It’s likely your child has practiced one of these songs during their music lessons in Denver. Even if they haven’t, your child may know the lyrics to songs such as “This Little Light of Mine” and “This Land Is Your Land.” That means the song they pick will be a little easier to learn since they won’t need to memorize new lyrics. The only downside to picking a traditional song is that many people in the audience likely know it and may compare your child’s version to other versions they’ve heard before. They will also be more likely to recognize mistakes. It’s also possible another participant will pick the same song.

What About the Oldies?

“Oldies” are typically hit songs that were popular from the 1950s up to the 1980s. Like traditional songs, many people are familiar with some of these oldies. “Respect” by Aretha Franklin and “Can’t Help Falling in Love” by Elvis Presley are perfect examples of Oldies hits. You can practice these harmony singing exercises on a daily basis with your music teacher. They have a more modern touch to them that traditional songs may not have. Again, your child may be familiar with some of these songs. Some, such as “Respect,” will really allow your child to show off their range. If done well, their performance can really impress the audience.

If your child loves musical theater and Broadway shows, there are plenty of songs in the genre that are great for talent shows. “Tomorrow” from Annie and “Somewhere Over the Rainbow” from The Wizard of Oz are fan favorites that are very popular, even today. For a duet, “Beauty and the Beast” from the Broadway version of the Disney movie is a great choice. If your child wants to do something a little more upbeat, any of ABBA’s hits from the Mamma Mia! musical may be good options. Musicals offer songs that range from the upbeat and comical to the dramatic and emotional, so there’s something out there for everyone.

The 80s and 90s are full of great pop songs that have become classics. Your child might love performing to Michael Jackson’s “Beat It” or Gloria Estefan’s “Turn the Beat Around.” These are high-energy songs that can allow them to add some fun dance moves to their performance. There are also great songs here for groups, including “Don’t Stop Believin” by Journey.

Of course, there are some modern and contemporary songs that are great for performing at talent shows. Your child may love Taylor Swift and want to sing one of her songs. Adele’s “Rolling in the Deep” is very popular, too, as is “Love Song” by Sara Bareilles. A talent show is a great place for your child to perform one of their favorite songs.

If your child is in need of vocal lessons, we can help. Our teachers will come right to your home for every lesson, plus we virtual music lessons, too. However, our online music lessons are being taught by local music teachers with live lessons tailored to your child! Contact us today to learn more.