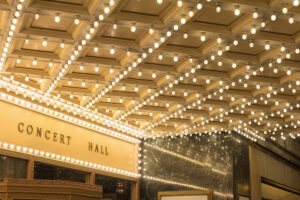 If you have older children who are in high school, you may already be talking to them about college. You shouldn’t wait until they’re seniors to begin this conversation—by then, it can actually be too late to get the GPA and extracurricular requirements the most exclusive programs require.

For singers specifically, you definitely need to begin looking at college programs early so they can build up a resume and continue or begin private voice lessons.

Voice Teachers who come to your home!

Meet our voice teachers and see if we serve your area.

Young performers that dream of being on Broadway should start researching college musical theater programs so you both know what requirements they will need to meet. Your private voice teachers could help with this, too.

Here are some of the colleges that have performers on Broadway right now.

AMDA, as it’s normally called, has campuses in both New York and Los Angeles. The academy puts on a number of different productions every season, so students get a great chance to gain actual theater experience.

Some of these productions are short plays, while others are full-length musicals. Students can also submit pitches for the Project 15 Series—a special series of 15-minute short productions students write and star in.

Located in Pittsburgh, Carnegie Mellon University has a long history of academic and artistic excellence—in fact, it’s the oldest drama school in the U.S. that you can get a degree from.

For musical theater/performance students, the university’s partnership with the American Society of Composers and Publishers is something that won’t be found anywhere else. This partnership gives students the chance to work with professionals to create new musicals and compositions. Alumni such as Stephen Schwartz also often return to teach workshops and master classes.

Oklahoma City University is a small private arts university in the middle of Oklahoma, so it’s ideal for those who aren’t certain they want to move to one of the coasts for college. This also means the cost of living is much less than it is in New York or LA, which is another bonus.

Despite its smaller size, university graduates often find success on Broadway and in other professional performance roles. The university puts on six main productions a year plus a number of smaller productions. Starting in 2020, OCU alumna and Tony- and Emmy-winner Kristin Chenoweth will be teaching as an artist-in-residence.

The Boston Conservatory at Berklee has a reputation as being one of the most challenging programs around. It’s not for those looking to breeze through their degree, but those who do apply and get in know they’re going to get one of the most comprehensive performance educations around.

All students receive a foundation in voice, acting, dance, musical theater, and more, plus they have private voice lessons and work as crew for productions to learn what goes into running a show. Add to this the masterclasses and lectures by award winners and leaders in their fields and you have a program few others can match.

Pace University is located in New York. Its performing arts programs do more than just provide vocal lessons, theater experience, and other performing courses—it also focuses on the business aspects of the performance industry.

Learning about the financial (and even legal) side of things can be incredibly helpful to performers. Their musical theater degree is fairly new, but that doesn’t mean it’s not top-notch. The faculty and program directors have years of experience in the industry and offer a high quality education.

If your child wants to be on Broadway like many of the graduates from these colleges, they need to start now with an Atlanta voice teacher or another local area teachers. Contact us today to discuss private voice lessons.