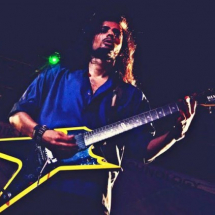 Vinay Elias Joseph, age 26 , is originally from the state of Kerala, India. He started playing the guitar in 2003, at the age of 14, as a 9th grade student living in Abu Dhabi, U.A.E. He spent the next year observing and practicing the talents of the many musicians he acquainted himself with, absorbing everything he learned along the way.

He has adopted a teaching method that is unique to the capabilities and preferences of each student. After teaching the basic's of music theory and the instrument of choice, he enjoys shaping the curriculum in a way that encourages the students to learn what they want to learn as well as guide them in the 1st steps of their musical journey. The goal is to help nurture the students own musical sensibility and boost creativity, which will help them find their own individual musical 'voice' and achieve their musical goals.

Vinay formed his first band (Reign Of Wrath) in 2005 and assumed the role of the primary song writer/ lead guitarist. The band immediately started playing regularly in the local circuit and gained a vast amount of popularity. During this time, his classmates and friends were urging him to teach them what he knew. His first students were two classmates, and he went on to teach eight students before graduating high school, in 2008.

While still in high school, his band was invited to play at the "Dubai Desert Rock Festival", one of the largest music festivals in Asia. Alas, the music scene in the U.A.E. was mainly underground and did not hold promise for Vinay's future. He completed his schooling and left for India, in search of greener pastures.He soon met fellow musicians, whom shared with him an incredible, musical chemistry, and formed the band AbraXas in late 2008. This was the beginning of his amazing journey in music.

In 2009, AbraXas took the Indian music scene by storm when they won the revered "R.A.I.T Unchained Battle of the Bands", and this was just the start. They went on to win the National finals of "Campus Rock Idols (Edition 5)", which led them to open for Iron Maiden at "Rock In India 09". The band's ability to captivate a listener's attention, through their original sound and engaging performance on stage, helped them to achieve popularity in the Indian music scene at a rapid rate.

During this time, Vinay started teaching five students in Pune, while also attending college as a mechanical engineer major. Four of those students are now a part of the emerging Indian music scene. In 2010, Vinay started experimenting with extended range guitars, after his band gifted him his dream 7 string guitar in appreciation for his contributions to the band. Armed with his new axe and sound, AbraXas took India by storm, yet again, and went on to win the "Cherrapunjee Indigenous Festival National Level Rock Competition" and the prestigious "Mood Indigo Livewire Festival". After a brief break, he started teaching again and taught group and individual lessons at the local music school in Pune. He taught twelve students from 2010-2012.

2012 was an exciting year for Vinay. He began working as a Brand Manager for Furtados Music and was put in charge of all business affairs for Warwick, Digitech, Takamine, and D'addario, in India. Later that year, he was offered an endorsement deal, and became the first internationally endorsed Indian artist, with Laney Amplification (U.K.).

In search of better opportunities, Vinay Joseph immigrated to the U.S.A with his family in Sept 2012. It was a difficult decision to leave behind the place he now called home along with the life he had worked hard to establish, but he wasted no time getting right into the Texas music scene. After playing for a few notable bands he finally has found his place in Legion, a young and ambitious thrash metal band from Houston, Texas.

Vinay has taught over ten students since settling in Houston and wishes to continue to nurture and guide the musical talents present inside everyone.