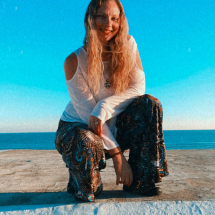 Tatiana found her love of music at only two years old, playing the piano for hours, dancing around singing her own songs. At three, she began private piano and violin lessons, igniting a deeper calling. She studied the Suzuki violin method for over seven years. Her passion for music, dedication to her craft, and ability to express emotion through song inspired her parents and teachers. At age six, she was the youngest member to join the Salem Youth Orchestra in Salem, Oregon. She continued with the Orchestra until she became Concert Mistress at age eleven. She also began studying violin at Willamette University with a Professor, whom she studied with throughout her high school and college years. This led to her winning a competition to be a soloist with the professional Salem Chamber Orchestra at age thirteen. She moved to the San Francisco Bay Area with her family at sixteen, where she received a full scholarship to the San Francisco Conservatory of Music and performed with the local Orchestra. After high school, she transferred back to Salem, Oregon, to study with her professor at Willamette University and attend Corban University as a Worship Arts & Violin Performance Major. She was Concert Mistress of the College Orchestra and participated as a leader of the worship band. She also sang in college choirs and was featured as a soloist on multiple occasions.

As she entered her teens, Tatiana's passion for singing and songwriting was ignited. She would spend most of her free time creating melodic tunes for voice and piano. Tatiana found her true faith and mission to create spiritual pop music during this time.

After college, Tatiana married her husband, Caleb, of eleven years. They now have four beautiful children under the age of ten, including twins! Caleb was inspired by her passion and love of music, which brought them together. He began teaching her guitar, and she now has added yet another instrument to her songwriting creations. They also participated at multiple church services a month for almost a decade, where Tatiana actively led the worship band through voice and piano or guitar and soloed as a violinist.

Tatiana believes in the power of music and enjoys inspiring others to pursue their passions and their dreams. She has been teaching private music lessons for over eighteen years. Making learning fun and creative, motivating students to practice technical skills, and creating space to learn songs they find inspiring. Tatiana believes the best musicians play with passion rather than perfection as she encourages the balance of aural skills and sight-reading.

Tatiana is also currently pursuing her performing career, in which she adds the unique sound of her classical violin training into all of her musical creations. Tatiana and her husband, Caleb (The Grateful Givers), also collaborated in a recording project, a cover of Hillsong United's Oceans.