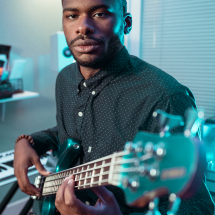 Reef started their musical career at the early age of 4. They played through grade school and regularly traveled to Ottawa, Kansas to train at the Suzuki Strings institute over the summer. They started playing many styles of music ranging from musical theatre, classical and jazz, to rock, pop , and hip-hop. Reef continued to gain experience through involvement with multiple youth groups including the Lakewood Kidslife Worship Team, the Young Sounds of Houston Big Band, and a list of smaller rock influenced groups.

They have, since then, honed their skills at Prairie View A&M University as a double and electric bass strings major and graduated with a BA in Music and Marketing. While in higher education they also started studying other instruments such as drums, guitar, and piano. As their education progressed, these instruments became deeply important to their development and gave them more avenues of expression. Reef now teaches lessons as a way of expanding, expressing, and sharing their musical knowledge and experience with other musicians that are eager to learn.