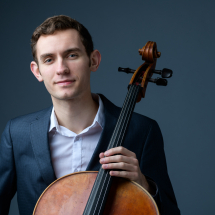 A native of Loveland, Colorado, Jeremy Kreutz is pursuing his Master's degree at the Rice University Shepherd School of Music under the tutelage of cellist Desmond Hoebig. He received his Bachelor's degree from the Oberlin Conservatory, where he studied with Darrett Adkins. Jeremy has participated in the Kneisel Hall Chamber Festival, Round Top Institute, National Youth Orchestra of the USA (NYO-USA), and the Aspen Music Festival's Orchestral Fellowship program. During the summer of 2017, he was invited to perform alongside members of the International Contemporary Ensemble (ICE) as part of the Ojai Music Festival, premiering works by Vijay Iyer and Courtney Bryan. Jeremy is a substitute cellist with the Houston Symphony Orchestra, and is on the performer's roster of Lincoln Center Stage. He has performed in masterclasses for musicians such as Johannes Moser, Joel Krosnick, Mark Steinberg, Joel Smirnoff, and Amit Peled, and was the winner of the Aurora Symphony and Greeley Chamber Orchestra concerto competitions. He considers community engagement an incredibly important aspect of his life, and has volunteered with numerous Elementary and Middle schools in Colorado, Ohio, and Illinois, as well as Colorado's El Sistema program.