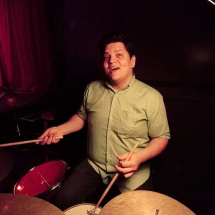 Gabe is a multi-instrumentalist musician, perhaps best known as a drummer and guitarist. He has received several accolades for music, including both the 2012 and 2013 Houston Press Music Awards for “Best Drummer.” He currently plays in a country band called “The High Meadow Drifters” as well as an indie band called “Londale”.

He has been a music teacher for over 10 years and teaches guitar, ukulele, bass, and drum students of all ages and abilities. Recently, he has taken on building guitar effect pedals and even teaches a few of his students how to make effects from scratch!