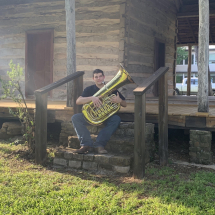 Ethan Bowles is a tubist and guitarist from the small town of Kingsbury, Texas. He currently attends the University of Houston for Tuba Performance and Composition. He is an all-state musician on the tuba and has played in principal positions in the San Antonio youth wind ensemble, Saywe, and the Youth Orchestras of San Antonio (YOSA) Philharmonic. He is also proud to have appeared at Carnegie Hall on two occasions. He has a special interest in playing German and Czech polka and Mexican folk music such as Banda and norteño. In addition, he has played guitar in several local bands spanning genres from metal to blues. He has also enjoyed performing vocals in these groups. Ethan is very passionate about his craft and sharing it with others.

In addition to performing, he enjoys going to the opera and attending various styles of concerts, listening to records ,and finding new music, as well as writing his own. Ethan also loves nature and the outdoors, actively pursuing activities such as hiking, and traveling to new places.