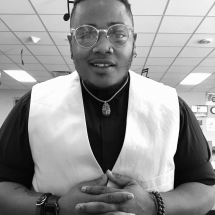 Cadence believes in the power of music and truly believes anyone can learn. In 2013, he graduated from the University of Texas at San Antonio with a Bachelor of Arts degree in Music. In 2015, he earned his Masters of Education degree from Walden University. While completing his degrees, he had the opportunity to study under amazing musicians and educators such as Ron Wilkins, Ron Ellis, Dr. Donald Miller, and Stephen Krause. Cadence has had the opportunity to perform in countries all over the world including Germany, France, Italy, Austria, and more. Currently, he fuels his passion for music as a high school music teacher, founding band director, and serving multiple local churches. Some of his active memberships include, the Houston Pride Band, Texas Music Educators Association, and founding member of the Mu Tau chapter of the Kappa Kappa Psi National Honorary Band Fraternity.

Cadence has over 15 years of experience as a private instructor. He began his career teaching private lessons to middle school students as a senior in high school. He continued teaching younger musicians as he worked to earn both his degrees at the University of Texas at San Antonio and Walden University. Cadence now teaches music to young learners in and out of his career setting, and is even helping to prepare students as they audition for admission into various college music programs across the country.

"When teaching total beginners, I like to start with an appropriate method book in conjunction with basic arrangements of popular songs that the student can relate to. We use those resources as a vehicle to a strong foundation. And then gradually introducing the student to new genres. I also spend a great deal of time discussing the importance of breath. I will often incorporate Breathing Gym exercises into our session. I encourage my students of all skill levels to perform publicly whether through competitions, recitals, or paid gigs. Students enjoy showing off what they've worked hard to accomplish!"
-- Cadence Campbell