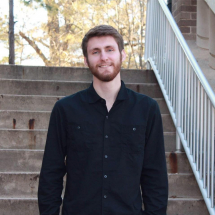 Andrew Moore is a performing musician, song writer, and audio engineer in the Houston area. He grew up in rural northeast Texas where he was exposed to music at a young age. He began his musical journey at age 7, playing a wide variety of instruments throughout his youth. After discovering his passion, Andrew decided to dedicate his life to music.

Seeking further knowledge, he went on to receive a Bachelor of Music in Sound Recording Technology at Stephen F. Austin State University. In his time in college, he studied under many great professors, furthering his expertise in audio production and as a musician. In this vibrant and diverse community, he had the opportunity to collaborate and performed with many of his colleagues.

Andrew’s primary instruments are drum set and guitar. Starting out as a classically trained percussionist over years he transferred his primary focus to popular music on drum set and guitar. He enjoys gigging with other musicians and playing on studio recordings. He is the guitarist and singer of his own rock band, Rust. He primarily writes music for his group, but loves writing with other musicians as well. In addition to playing Andrew works in the audio production field. He works with other musicians running sound for them during live performances, as well as recording and mixing in studio settings.

Andrew is always striving for excellence and creativity. Sharing his passion with other artists and musicians has always been a driving force. He looks forward to fostering growth in young musicians and playing a key role in their development.