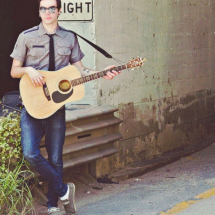 Music has made Andrew's world go around from a very young age. He first picked up a guitar at the age of 9 and instantly fell in love. He remembers coming home from school and sitting in his bedroom playing along to his favorite albums for 6+ hours. Wanting nothing more than to slingshot himself into the musical world, by the age of 14, he had formed my first band. He describes the experience as "no doubt a bunch of noise-making, moody teenagers", but the experience alone was enough to confirm what he had already suspected: music was his calling. By 16 he had gained enough control over his projects to begin to land gigs at reputable venues. His first was at Fitzgerald's here in Houston. By age 17 the group had landed the sponsorship of their local music shop as well as a clothing sponsorship by Buckle.

After graduating high-school though, Andrew yearned for more. With age came expertise in both skill and networking, and at age 18 (like any aspiring Texas musician) he packed it up and headed to Austin. It was a great struggle at first. It is not easy being the new guy in a town that in a sea of music. After scraping by and recording his first EP in the closet of his tiny, east-side apartment, he finally managed to wedge his way into some decent gigs. Through those, Andrew finally met with a group of guys that shared his ambition and vision. They quickly formed a group and landed a local record deal within the first few months.

At 19, Andrew began teaching others. He found that he really loved sharing his experience. There was nothing quite like seeing somebody's eyes light up when they finally grasped something. After a year or so, he started feeling the itch for the live scene again, and decided to move back to Houston to light up the tons of connections one can only find in their hometown. He took the teaching with him, and began to grow his studio.

In addition to teaching, he has established one of the top indie/folk bands in the Houston area. They have held a position on the top 10 (and frequently top 3) indie charts here in town for over a year and a half and play everywhere from House of Blues to Fitzgerald's to Warehouse Live. He has shared the stage with bands like The Wallflowers, The Foo Fighters, The Shins, Echo and the Bunnymen, Minus the Bear, and many others. He has spearheaded projects of all genres including blues, classic rock, hardcore, indie, folk, metal, and everything in between. Teaching has really become a cornerstone of having music make his world go around. He has developed a tried and true rhythm and method for all ages and has had nothing but positive results.