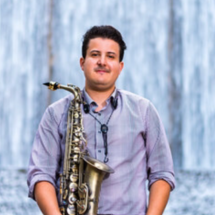 Aaron Montes is a Houston native who has been teaching in the Spring/Houston area for about 3 years. He is a graduate of Sam Houston State University and has a bachelors in Saxophone performance with an emphasis in Jazz. He also studied piano at the college level as a part of his music performance degree. Aaron has had continued success through his teaching at the academic level with the majority of his students winning district and state level auditions. Over the last two years he has acquired several new piano and saxophone students and looks forward to growing his studio even further. Besides teaching, Aaron is an accomplished performer and has received several awards during his high school/college career. Aaron has recorded with legendary jazz trombonist Bill Watrous on an album in 2010 and has had the privilege of playing with other great jazz artists such as Danilo Perez, Ben Street, Adam Cruz, John Fedchock, Paul English, and many others. Aaron's future aspirations are to continue his education in music with a masters degree within the next few years.