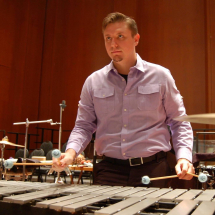 Aaron is a well-rounded and well-known freelance percussionist and educator based in Houston, TX. After completing his Masters Degree at Rice University in 2011, Aaron has performed with numerous professional organizations throughout the nation. He most notably earned positions in both the Houston Symphony Orchestra and the San Antonio Symphony as a substitute percussionist, and over the past ten seasons he has performed over 200 concert series with these renowned organizations. He has also made frequent appearances with the Houston Ballet and Theater Under the Stars broadway company, showcasing his diversity in performing musical styles. Other orchestral appearances include the Fort Worth Symphony Orchestra, Arkansas Symphony Orchestra, Baton Rouge Symphony Orchestra, West Virginia Symphony, New World Symphony Miami, South Florida Symphony Orchestra, Texarkana Symphony, Waco Symphony Orchestra, Galveston and Mid-Texas Symphony.
Aaron has shared the stage with many world renowned artists and musicians. Notable performances include accompanying The Who, Seth McFarlane, Ben Folds, Weird Al Yankovich, Wynford Marsalis, Christian McBride, Yo-Yo Ma, Renee Fleming, Joshua Bell, Cirque de Solei and many more.
Along with his performance career, Aaron has been an avid educator in the Houston area for just over the last decade. He maintains a private studio of 20-30 students ranged from middle school to college and has taught countless masterclasses, summer camps and UIL clinics in over a dozen school districts in Texas. He currently teaches students and weekly masterclasses in Pearland and Clear Creek ISD's. He is the weekly Timpanist/Auxiliary percussionist for the televised services at Second Baptist Church Woodway.