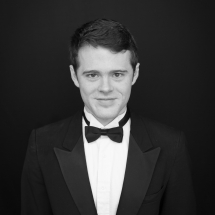 Stephen Ash earned a Bachelors of Music from the University of Mary Hardin-Baylor where he studied music education and voice performance, and a Masters of Music in voice performance and pedagogy from the University of Houston. He now teaches voice and piano lessons privately and in Houston-area schools. In the summers, Mr. Ash directs the 15th Street Church of Christ Summer Singing School for children aged 3 to 14, and has served as a guest clinician in choral music camps at Temple College and the University of Mary Hardin-Baylor.

Mr. Ash has performed on the operatic stage with the Moores Opera Center and Voces8, appearing as Paolino in Il matrimonio segreto, Truffaldino in The Love for Three Oranges, and Lindoro in L'italiana in Algeri, among others. He also appeared as the Sailor in Dido and Aeneas at the Milton Abbey Summer Music Festival in Dorset, UK. This season, he looks forward to performances with Houston Grand Opera and Houston Grand Opera To Go's performances for children.

Also a pianist, Mr. Ash plays the role of accompanist for his own studio and others, and has appeared as a collaborative pianist in recitals with colleague and student alike. In 2014, he received the outstanding student accompanist award from the National Association of Teachers of Singing, South Texas chapter. A singer in the NATS competitions as well, Mr. Ash was the first place winner of the Texoma Region competition in 2015, and a finalist each of the previous two years.

Mr. Ash loves sharing the joy of music through both education and performance.