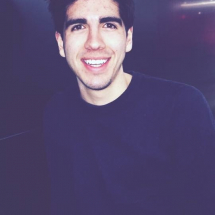 Oliver Penn is a Guitarist, Drummer, and Pianist who writes and composes his own music. He has been playing music professionally since 2015. He is well rounded in different genres ranging from Rock, Jazz , Funk and Pop music. Oliver attended Providence College in Providence, Rhode Island where he studied music. While in college he performed in the Symphonic Winds Ensemble, Funk Band, Jazz Band, Pep Band, as well as gigging around the Northeast.

Since graduating Oliver's music has taken him from Rhode Island to Houston, and everywhere in between! He just recently returned from a Spring 2018 Tour where he played guitar and sang in his own band, and can be found playing around in Houston, as both a drummer and guitarist.

Oliver has a passion for teaching music. "There is nothing quite like seeing a student understanding a concept, or sight-reading a piece of music that they begin to realize is a famous song that they can now play," says Oliver. "While performing as a professional musician is wonderful and gratifying, it would not be the same if I wasn't also able to teach music to my students." He has been teaching for Lessons In Your Home since May 2018. He teaches guitar, drums, and piano to students of all proficiencies and ages! Oliver has students as young as 5 and as old as 65.

His other interests include sports, (hockey, tennis), musical theater, and film.