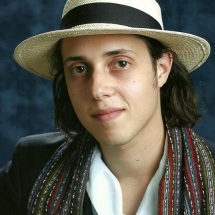 Michael Anthony Shanks is a guitarist, composer and seasoned music teacher from Houston, TX. In addition to the guitar, he also teaches, ukulele, mandolin, banjo, electric bass, piano and saxophone. His music has taken him to some pretty amazing places such as Buenos Aires, Argentina and London, England. He currently resides in his hometown of Houston and is ready to teach you how to groove and jam on your instrument, no matter the genre!

Michael began his guitar odyssey at age 15 while he studied with famed Texas based jazz guitarist John Edwards Ross. From there he went on to attend the University of Texas and graduated with degrees in music and anthropology. While in Austin he played with numerous popular bands such as Phunk and Associates, Chinampa and Ruby’s Jazz Garage. And during his time at UT Michael traveled to London to study modern popular music and electronic composition. After graduating he worked as a music instructor at the Texas Fine Arts academy for two very successful years.

In 2008 Michael moved to Buenos Aires and went on to play with some of the best musicians the country has to offer. He jammed with the Mr. Jones Blues Band and toured the nation’s southern region, Patagonia, with Carla della Maggiora and the Birthday Faces.

In 2010 Michael returned to the states and settled in Seattle, WA where he played with such amazing bands and musicians as Miles From Chicago, Jovino Santos Neto, Down North and Michael Clune and the Sleep till Noon. Now back in Houston, Michael is ready to share his knowledge and experience with all who care to listen.