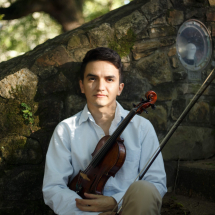 Jonathan Andino is a Honduran native violinist who began his musical studies at the Victoriano Lopez Music School in his birth city of San Pedro Sula. After graduating as one of the top string players in the school, he began his professional career as a chamber musician for the SPS chamber orchestra, just before he decided to continue to pursue his higher studies. In 2019 Jonathan completed his undergraduate studies at Northwestern University of Louisiana and now he is working to complete his graduate degree at the University of Houston.

Jonathan has garnered teaching experience with violin and piano students throughout his musical career, in addition to his performance experience. He was a member of several orchestras in the ArkLaTx area and is also recipient of first place prizes in competitions in the LA area. Jonathan has worked in master classes with high profile musicians such as members of the Duisburg Symphony in Germany and Mauricio Fuks, Jose Aurelio Castillo, among others. Jonathan is currently finishing his studies at the University of Houston.