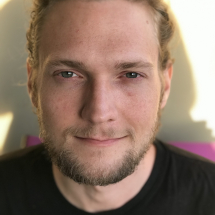 Education: Associates in Music Performance Multiple Guitar and Jazz Camps throughout my adolescence.

Joe Risch was born in Milwaukee, Wisconsin and grew up amongst the cherry orchards of Door County, Wisconsin. He exuded a deep passion for music at an early age, but it wasn’t until he picked up a guitar at age 12, that his native ability was realized. That summer, he locked himself in his room with his new guitar, and just six weeks later, emerged, playing some of his all time favorite tunes…albeit with bruised fingers. Passion for music and the guitar grew and grew in his heart and he sought out the very best to mentor him on his quest to shred.

Throughout the 18 years since that fateful summer, he has learned alongside reputable musicians and instructors such as Paul Sowinski of Big Mouth and the Power Tool Horns, Charles Eckhardt of Bacchus Lotus, Steve Peplin at the, Milwaukee Area Technical College, Mike Standal at the Wisconsin Conservatory of Music, and Paul Silbergleit at the Wisconsin Conservatory of Music

Joe has performed as a guest guitarist alongside many of the above mentioned musicians, as well as performed in various groups of his own throughout the years. He even performed regularly with an underground hip hop act, and got picked up to produce two albums utilizing Digital Audio Workstations, guitars, basses, synths, and perform them live via analog turntables. He also spun the sets for national acts Blue Scholars and Dumbfoundead when they came to Milwaukee. From concept to creation, Joe has an ear for, and knows how to make original compositions in nearly any genre.

Joe has attended all sorts of guitar and jazz camps, master classes, and workshops, as well as private lessons, so he has experienced many different styles of guitar instruction. He has seen the ins and outs, what works, and what doesn’t. In addition to music, Mr. Risch is very active in the visual art community, and has spent a great deal of time teaching students to paint, draw, and sketch their mind’s eye onto a canvas. All of this comes together to create a patient, yet meticulous method of instruction which inspires and nurtures the creative spirit we have inside all of us.


Associates in Music Performance Multiple Guitar and Jazz Camps throughout my adolescence.