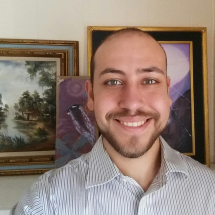 Baritone Ivan Ley is both dedicated music educator and passionate performer. Getting his start in formal music training at age twelve, Ivan began his musical education with the clarinet. Adopting the bass clarinet as his primary instrument in the seventh grade, he took private lessons from clarinet teacher Paul Dods while participating in the band programs at Scott Johnson middle school and later Boyd high school in McKinney ISD. Ivan went on the join choir in his freshman year of high school, since band alone could not slake his thirst for music. His dual participation in his high school band and choir programs, led by directors Joe Nuñez and Melissa Logan respectively, solidified his love of music so completely that by the time he had graduated he decided to become a music teacher himself. Ivan received his Bachelor of Music Education from Oklahoma State University, having studied voice there with Romanian-born soprano Dr. Anné-Marie Condacse and choral conducting under world-renowned composer-conductor Dr. Z. Randall Stroope. Catching the performance bug at OSU then led him to the University of Houston opera program where he just completed his Master of Music in Vocal Performance at the Moores School of Music in August 2018. There, he studied voice under tenor Joseph Evans and performed for two seasons with the Moores Opera Company under the direction of Buck Ross.

Among Ivan's performance credits are the roles of Taddeo (L'Italiana in Algeri), Figaro (Le Nozze di Figaro), Geronimo (Il Matrimonio Segreto), the King of Clubs (The Love for Three Oranges), the Prince (Romeo et Juliet), and Francis Nurse (The Crucible). He also starred in the role of Sir Peter Teazle in the world-premiere of Robert Nelson and Buck Ross's The School for Scandal in early 2018. An avid chorister, Ivan performed for five years with elite choirs at OSU under the direction of Dr. Z. Randall Stroope and continues to sing with the Memorial Drive Presbyterian Church Choir under the direction of Dr. Charles Hausmann, director emeritus of the Houston Symphony Chorus.

Ivan has taught lessons privately since early as 2013. His training and experience in vocal education come from countless hours as a student teacher in music classrooms, teaching and conducting choirs as well as working one-on-one with students of all ages. As a teacher, Ivan believes that every student has the potential to succeed in becoming a better musician. With a focus on music theory and technical fundamentals, Ivan works together with his voice and piano students to discover their unique musical expression and have fun while learning their instrument. Students will grow while instilling essential skills, such as maintenance of healthy playing and/or singing, executing effective and efficient practice routines, refining interpretation of appropriate repertoire, and preparing physically, mentally and emotionally for performance. Most of all, they will learn the immense satisfaction that comes with producing art for personal and communal enjoyment!