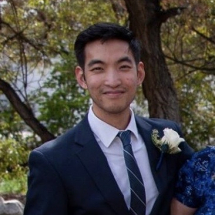 Henry Dang is a native of Austin, Texas and currently resides in the Houston area, where he teaches within the Fort Bend school district. He received his Bachelor's degree from the University of Houston's Moores School of Music, where he studied with Randall Griffin, and recently completed his Master's degree with Lauren Jacobson and Michelle Orman at the University of Northern Colorado.

While in Colorado, Henry performed with many different groups within the school including the school's orchestra which traveled to the Colorado Music Educators Association convention. Henry maintained an active studio in the Houston area before moving to Colorado, where he taught at school districts in Katy, Crosby, and Spring Branch.

Henry has also enjoyed performing as a chorus member through his years in school and with the Houston Symphony during the 2015-2016 season, where he sung under conductors Andrés Orozco-Estrada and David Zinman.

Henry enjoys working with students to not only achieve their musical goals, but also to implement them with skills that can be utilized through the rest of their daily lives. He enjoys instilling a true and genuine love for music that helps students find joy through their own playing and everyday listening.