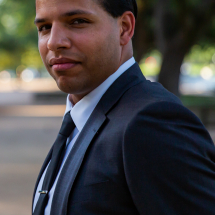 Geoffrey Peterson is a lyric baritone from Trumansburg, New York, currently living in Houston, Texas. He most recently created the roles of the Pastor and Walter White in Houston Grand Opera's world premier of Marian's Song. Previous credits include King Melchior (Amahl and the Night Visitors), Corporal (La Fille du Regiment) at Opera in the Heights, the Nosey Parent (Speed Dating Tonight!) with the Taos Opera Institute, and Luiz (The Gondoliers) with the Houston Gilbert & Sullivan Society of Houston.

Mr. Peterson has also been active has a teaching artist with Houston Grand Opera's HGOco program, leading empathy training workshops at the Harris county juvenile detention center & performing "Story book Opera's". He has also been a featured performer with their acclaimed Opera to Go program. Credits include Pavo Picasso (Strega Nona), Dulcamara (The Elixir of Love), and Isabella/The King (Cinderella in Spain).

An advocate for social justice through music, he has also been a soloist and ensemble member with the Houston Ebony Opera Guild, The Dorothy Cotton Jubilee Singers, and the Vitamin L Chorus.