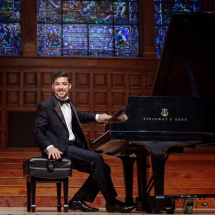 Education:
University of Redlands- Bachelor’s of Music in Piano Performance

After being born in Los Angeles, Edmar spent his early childhood in Congonhas, Brazil, the country of origin of his parents. Then he and his mother and brother returned to the United States. At age fourteen, he was inspired by his teacher, marking the discovery of his passion and talent for music. In middle school at the George Visual Performing Arts School in the High Desert, Edmar had his first contact with the cello. He then began playing the school's string orchestra and taking piano lessons at the local music store. With his passion for music, he caught the attention of Dr. Linda Minasian of Victor Valley. Recognizing his gifts, she accepted him in his piano studio and under his expert guidance, his talent flourished.

Pianist Edmar Oliveira, a young artist from Adelanto, California is a recent graduate of the University of Redlands. A former student of professor Louanne Long, Mr. Oliveira received a full talent scholarship, as well the LeHigh student scholarship and the Rotary music scholarship in 2012. In 2016, he was one of the finalists in the Redlands Bowl Young Artist's Competition. In addition, he won, in 2014 and 2016, the most prestigious music competition of the university, the President's Honor Recital.

Since graduating from the University of Redlands with a Bachelor's of Music in Piano Performance, Mr. Oliveira has distinguished himself as a powerful performer known for his riveting performances of diverse styles. Edmar is also a proficient harpsichordist, has a strong affinity for jazz, and improvisation. In addition to performing, Edmar has more than five years of experience in piano/music instruction. His teaching philosophy and methods are flexible and cater to the individual needs and goals of each student.


University of Redlands- Bachelor's of Music in Piano Performance