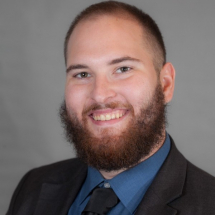 Don Newman is an active performer and recording artist native to the Clear Lake area, who began studying guitar at the age of 9.

In middle school, he started playing clarinet, and later moved to bass clarinet in high school while also picking up the bass guitar, where he consistently performed with the region bands and once with the region jazz band. Picking up the bass was a lucky switch, for not two months later he was offered a touring position with the Teal Sound Drum and Bugle Corps, performing the music of Dream Theater and Coheed and Cambria across the country. A desire to join the hornline section led him to begin learning tuba sophomore year, and another few short months later, he was offered a touring contract and traveled the country performing on a contrabass bugle. This led to a successful six year career, including three years touring with The Cadets, one in leadership, and with The Bluecoats.

In addition to touring activities, Don used his opportunities in University to diversify the amount of ensembles participated in and instruments known, taking private piano lessons before studying piano in college, joining SFA’s Orchestra on F Tuba for Symphony Fantastique, performing with the Jazz Band on Bass Trombone, singing Bass II in Choir, performing in SFA’s drumline, and becoming principal tubist in the second band.

After a short time serving as a software developer for a major recycling company while keeping a busy live performance and recording schedule, including
filling in for blues bands, churches, and orchestras, Don is extremely excited to be making a return to the field of education, and looks forward to guiding you or your child on the wonderful journey that music is.