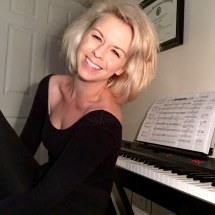 Ashley's love of music began at an early age. She first began playing the saxophone at age 11, followed by the piano and later flute and clarinet in high school. During her high school years she received many honors and recognitions for her musical abilities, including six outstanding soloist awards from various musical festivals, several performances with the Virginia All-State band, and the John Philip Sousa Award in 2001 upon graduating from high school.

Ashley Baker began her pursuit of a bachelor's degree in jazz saxophone in 2001 at the Shenandoah University in Winchester, Virginia. As lead alto for the Shenandoah Jazz Ensemble she performed in a variety of venues, including Senegal's St. Louis Jazz Festival, as well as a performance with Bob Mintzer. Ashley recently completed her master's degree at Florida International University in Miami. While living there she performed with many noted jazz musicians, including Duffy Jackson, Jim Snidero, and Arturo Sandoval. She also received an award in 2008 at the Monterey Jazz Festivals Next Generation”Collegiate Big Band Competition for her solo work on her own arrangement. In January of 2008 Ashley also participated in the final IAJE conference as a member of the 2008 Sisters in Jazz, and performed in a European tour with the group DIVA led by drummer Sherrie Maricle. In 2009 Ashley also performed with the Charles Tolliver big band for the Melton Mustafa Jazz Festival. Throughout college, Ashley maintained her skills on piano, flute, and clarinet, making her well-versed in all four instruments.

Ashley now resides in Northwest Houston. In addition to being an avid performer, Ashley also has extensive experience as a private and group music instructor, especially on piano and saxophone. She immerses her students in many styles of music, including jazz, classical, and contemporary genres. She has been giving private music lessons for over eleven years, and enjoys sharing her love of music with students of all ages and all levels of experience and ability.