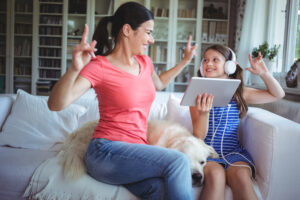 Musical Theatre is a unique art form in the music world. It combines many elements: dance, expression, song, acting, movement, scenery, and staging. It almost lives in a world of its own, not really akin to any form like it. If you as a parent see an interest in music theatre in your child, you may be lost and not know where to start. I have a short guide on how to foster that interest and support them through this journey. My work in musical theatre has allowed me to have a wide variety of experiences in the professional world and has opened me up to so many opportunities that have furthered my career outside of classical music, the degree I earned in college and teaching music lessons in Atlanta. I believe having a varied musical background will allow your child not only to learn to love music, but it will allow them to develop skills beyond just learning how to sing through their Atlanta music teacher.

Music Teachers who come to your home!

Meet our music teachers and see if we serve your area.

First, you must know a little background about musicals to enter the conversation. There are four main styles of musicals: Golden Age, contemporary, juke box, and pop/rock. Each of these comes with their own unique style.

Golden Age musicals are the original musicals from the 1950s and 60s: Oklahoma, Kiss Me Kate, Cinderella, South Pacific, The King and I, etc. These exist in a realm closest to classical music; the style invites more vibrato, a stronger head voice, and lyrical phrasing. The storylines are usually classic tales of love, loss and adventure.

Contemporary musicals came in the late 90s into the 2000s, and they are characterized by strong belters, upbeat dance numbers, and a large percussion base. These musicals include Legally Blonde, Kinky Boots, Something Rotten, etc. They typically have large ensembles, a few female leads and a male lead or two. Each of these leads usually has a ballad at an emotional turning point in the show, and what’s called an “I Want” song. It’s where the character describes what their goal is, whether that be a relationship, a job, success, love, it can be anything. These are archetypes that exist in the contemporary genre and many others.

The “jukebox” musical is a recent development that focuses on the music of a specific artist or genre, instead of newly composed music for the storyline. Some examples of this genre are Mamma Mia from the music of ABBA, Beautiful: the Carol King Musical, and Jersey Boys from the music of Jersey Boys. These songs are taught differently because they exist outside of the storyline of the musical; they were uniquely composed and then added to a musical instead of the other way around. Therefore, treat them almost as a pop song.

The last category is the pop/rock musical. These became very popular in the last few years to try to make Broadway more popular. The music is composed closer to the pop genre, requiring a true belt and a strong low range. Examples of this genre include Dear Evan Hansen, Beetlejuice, Hadestown, and Be More Chill. Heavily relying on the drum set, the music is upbeat and these songs sound like they could be on the radio, instead of out of Broadway musical.

Now that I know all this information, what can I do as a parent to help my child? Start up a conversation about their favorite musical, have them tell you why they like it, learn about the story of the show, then help educate them more about their interest. Take them to see a show, listen to the songs, research the actors in the show, learn about where the idea for the show came from. The best thing you can do for your child is validate their interest and show you care about it too!

Encourage them to work on a musical theatre song in their lessons, seek out opportunities to perform in your community if that is of interest to them, and get excited about their excitement. Schools and churches are a great place to seek that first performance opportunity, as well as community children’s theatres. The musical audition circuit has its own set of rules that would require another post, but the main point is to support your child and foster this interest. It is an amazing genre of music that will cultivate in your child confidence, drive, and passion.

If your child is interested in taking up music lessons, we could help set you up with a wide array of teachers. They can either come to your home to teach or can also provide online music lessons. Our virtual music lessons are taught by local music teachers who plan their lessons to suit your child.