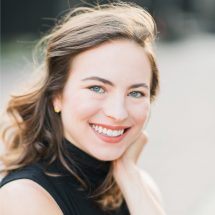 Zoë Miller is a professional violinist and music educator based in the Washington DC area.

Born in Connecticut, Zoë Miller began studying violin at the age of 6 and continued her professional musical studies in New York City at the Manhattan School of Music where she graduated from the Precollege Division in 2012. She went on to receive her Bachelor of Music degree from Rice University's Shepherd School of Music in 2016, where her teachers included Eric Halen and Cho-Liang Lin. While completing her degree at Rice University, Ms. Miller created and performed in numerous outreach events in the Houston community, including a holiday concert series in the Texas Medical Center and an education concert at the Children's Museum of Houston. She also created and taught a classical music appreciation course at Rice University.

In Fall 2016, Ms. Miller returned to New York to begin her graduate studies at New York University where she studied with Naoko Tanaka. While completing this degree, Ms. Miller also worked as an Adjunct Professor of Violin at New York University's Steinhardt School of Culture, Education and Human Development. Prior to her graduation in May 2018, Ms. Miller served as the concertmaster of the NYU Symphony for two years, and was also named the winner of the NYU Strings Concerto Competition with her performance of Samuel Barber's Violin Concerto.

Ms. Miller currently maintains a private violin studio with students ranging in ages and abilities. She is equally comfortable teaching beginners as she is advanced violin students. Whether it is through the study of classical music or pop violin covers, she wants all of her students to have an appreciation and love for all types of music!