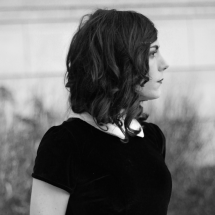 Zheanna Huff is a composer, producer, music theorist, visual artist, and multi-instrumentalist with a Bachelors degree in Music Composition from Indiana State University. Zheanna is incredibly passionate about music education and seeks to empower every student to create, express, and cultivate a lifelong joy of music. Zheanna teaches music composition, music theory, audio production, percussion, piano, and voice to a wide body of students across all demographics.

Zheanna has over a decade of performance experience in the realm of percussion, piano, and voice including both national and international touring experience. She has an extensive background in jazz, rock, metal, funk, and latin drum set while also carrying proficiency in orchestral and chamber percussion such as timpani, marimba, concert snare drum, vibraphone, and auxillary. Zheanna also has a focused interest in world music and has performed Brazilian bata, Afrocuban dances, a diverse range of African rhythms, Bulgarian folk rhythms, Indian classical music, Irish bodhran, steel pan, and spent significant time in Thailand studying Thai classical percussion. At the piano, she has worked regularly as a gigging pianist, trio leader, and teacher. Lastly, Zheanna has performed as a featured vocalist at international conferences while also working in voice acting, studio vocals, and several albums. Her approach to vocal pedagogy blends linguistics, acoustics, and traditional vocal pedagogy. Zheanna is a prolific transgender voice educator and regularly works with transgender women in voice therapy.

In her own musical expression, Zheanna smashes together the worlds of modern sound design with dense harmony, jagged rhythms, and mosaic-like melody. She regularly composes, releases, and performs music with a successful progressive metal ensemble, electro-acoustic solo project, and triphop duo. As a composer, Zheanna has a diverse catalog of works that span from video game music to orchestral commission. With the release of her 2016 LP, Icosahedron, she is slated to release two albums in Fall 2017 and has credits on several more.

Zheanna is eager to work with students, families, old musicians, new musicians, and anyone in between. Spreading the joy of music, self expression, and internal motivation is Zheanna’s goal as a teacher.