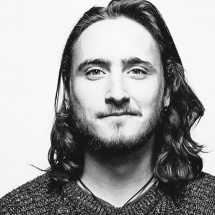 Wilson formed a loving relationship with music & art at a young age. While being raised by two true lovers of music in a small town outside of Atlanta, he was given an appreciation of the art form at a young age. He began learning drums and bass guitar at the age of 12 through various private lessons and school bands. The prior came with the "stipulation" of learning a brass and woodwind instrument as well, which he greatly appreciated later in life. By the time he was 14, he knew he wanted to learn the acoustic guitar. He instantly fell in love and hasn't looked back since. Wilson continued his journey with the instrument through self-teaching outside of school. It became a safe haven for him at every twist and turn in his life. Being solely self-saught on the instrument for the last decade has given him a deep appreciation for the emotionally healing and mentally empowering results the instrument can have on a young adult or child. Although self-taught, Wilson knows the impact a great teacher/mentor can have on a young musician's journey.

Wilson graduated from Georgia College & State University with a B.S. in digital media production. While in school, he performed with various bands. The most notable was the trio, Chuck Taylor & The Spoon. Chuck Taylor won various"battle of the bands" in Atlanta, Georgia, and became a regular entertainer at various venues across the Middle Georgia area. Upon graduation, he moved to Seattle, Washington for an internship with a local Ballard production company, Visual Contact. While working for Visual Contact, he was introduced to two of the members of Seattle based folk-rock band, Your Downstairs Neighbors. The three quickly became great friends and started working on music together. Since March of 2019, Wilson has served as the frontman for Seattle based rock band, Little Planet. They have continued to record and perform live. Wilson recorded vocals, guitar, and bass for the band's first EP. The band now has five members with Wilson on vocals and guitar. Wilson began to develop a love for music production while working with YDN frontman/ producer, Brennan Mackay. He has since begun producing music for short films as well as working on his own musical releases under the Little Planet name.

Wilson has devoted his life to music and trying to connect with others using his musical abilities. With a confident and caring attitude he knows he can pass on this love for music to a younger generation or his peers. He believes that musical talent should not only be measured by the degree of a student's abilities. Musical talent comes from a love of the art form. As long as a student is expressing themselves and begins to form a love for their instrument then that is the beginning of a successful future with music. Not all students will feel this passionate about their instrument right away, but that's where a caring teacher comes in. As a teacher, Wilson will help each student stay positive and move forward in their musical journey.