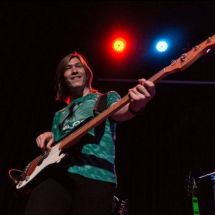 William Weiner is a musician from the San Francisco Bay Area, who has been playing the bass and guitar for over 10 years. Before moving to Los Angeles to attend the Musicians Institute in Hollywood, he studied with bass virtuoso Michael Manring. With both parents as professional
musicians, they agreed with him that leaving high school early to pursue music wasn’t too unreasonable.

William graduated high school at 16, and at 17 was living on his own in Hollywood, CA where he attended Musicians Institute and studied extensively with bass virtuoso Stuart Hamm. He was showcased at Bass Player Live 2012, received the Stanley Clarke scholarship, and graduated with his AA in Bass Performance. Shortly before graduating, he joined the band Symmetry with whom he toured all over Europe, and North America. He went on to perform with big name bands such as McBusted, Third Eye Blind, Don Broco, James Arthur, and Coasts in venues such as the London O2. When not on the road, William spends his time in the studio writing and recording.