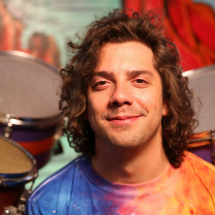 Growing up with music as central part of his life, William Carman possesses a deep respect for the power and personal growth available through songcraft. Every part of life has a rhythm, a melody, a tempo. The secret, in his mind, is to groove with the changes, challenges, and successes that it throws at us instead of avoiding them. Music education has not only taught him to overcome fears of acceptance, failure, and the unknown, but to feel empowered when faced with difficulty. Remembering the first time he stood behind the timpani, facing thousands of people in a large concert hall for his debut performance with the Kansas City Youth Symphony, he fondly recalls how the fear and anxiety seemed to slip away once the music began. The preparation, all those hours spent practicing and memorizing and struggling, finally made sense: he was creating something beautiful under pressure. Since then, Will has dedicated himself to both instrumental music, songwriting, and teaching the craft.

By the time Will graduated college, he was instructing several of his professors’ children and fellow classmates in everything from drums to guitar to piano. Along with drumming in a few local live acts, he gained proficiency in keyboards, percussion, bass guitar, banjo, mandolin, dulcimer, and live sound production while continuing his formal education at Kansas State University. Although participating in award-based groups like State Honor Band and Youth Symphony Orchestras before college, he developed a true passion and understanding of music through the casual joy of playing songs with his friends and mentors. Without formal music education and private lessons, however, this couldn’t have been possible. The time he spent practicing and learning from seasoned instructors laid the groundwork for him to blossom into a both professional musician and a more mature adult.

Will is adept at imparting the love of music through both performance and instruction. In his own life, it’s brought great joy and freedom, but also developed his skills as a leader, communicator, and member of his family and community. What he brings to lessons he teaches goes far beyond simply helping people play their instrument well. Students feel truly heard; their concerns and frustrations, as important as their curiosities and proud moments, are never cast aside for the sake of “getting more work done”. Self-discovery and emotional growth are central to his pedagogy, and he utilizes modern methods that emphasize fun and validation in contrast to the rigid, right-or-wrong formality of more classical schools of music education. Creating a space where music feels like play, rather than a chore, Will is dedicated to ensuring his students end their lesson feeling braver and more inspired. Remember, music is much more than an activity or skill, it’s a language, a way to better understand ourselves, a gift we can share endlessly with the world!