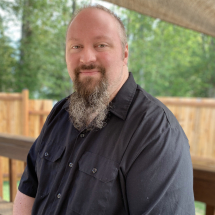 Steve is a drummer/hand percussionist in the Everett, WA area. He has been playing drums since the age of 11 (over thirty years) and views music as not just a hobby, but integral to a healthy life. He plays and teaches drum kit, djembe, and cajon. He enjoys playing jazz, rock, and Americana.

Steve began his musical journey the summer before entering 6th grade when he was allowed to play his stepdad’s drum kit for the first time. After being told by his school that he didn’t have natural rhythm, he talked his parents into letting him take lessons and continued with his instructor for the next 8 years.

During that time, he gained the skills and confidence to found several different bands alongside his guitarist brother, as well as playing in countless other gigs and several jazz combos. His latest project is a coffeehouse band, Meridienne.

Music theory is a fundamental part of every lesson for Steve, but it is not the only thing that is taught. A portion of each session is set aside for exploring music and learning to feel it at a deep level. He feels this is a crucial aspect of training a drummer/percussionist for every gig. Using intuition—grounded in theory—is what drives both his playing and teaching.