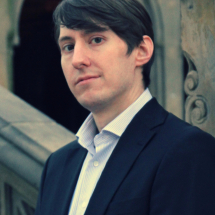 Called "Superb" by the Boston Globe, pianist and teacher Stephen Olsen, D.M.A. commands a wide range of repertoire, from the standard classical repertoire to avant garde music of our time.

As a performer, Olsen has performed all over the world and worked with some of the most esteemed composers of his time, including Helmut Lachenmann, John Luther Adams, Jonathan Harvey, and Michael Finnissy (who wrote and dedicated a piano piece to him). Career performance highlights include: Beethoven's 4th Piano Concerto in Kuala Lumpur, Malaysia; The music of John Cage at Lincoln Center's Bruno Walter Auditorium; A solo recital as a guest artist at Seattle University; Performing the music of Schoenberg with his daughter present at the Goethe Institute in Boston; A lecture recital in Xiamen, China; 2 seasons as pianist for the Fromm Players at Harvard University; Performances with new music groups such as the Calitthumpian Consort, the Seattle Modern Orchestra, and the Ludovico Ensemble. Of his performance of Jonathan Harvey's Tombeau de Messiaen at the Summer Institute for Contemporary Piano Performance at the New England Conservatory, the Boston Globe said it "stood out... among unfailingly excellent performances," and praised Olsen's "precision exaltation."

As a teacher, Olsen has developed an international reputation, teaching master classes and piano lessons throughout the United States and in Asia. He regularly judges competitions, adjudicates young performers, and leads master classes. Recent highlights include a master class for pianists at Seattle University, college teaching in Xiamen, China, and private studio teaching in Beijing, China. from 2012-2017 he was piano faculty at the historic Greenwich House Music School in New York City, where he maintained a large teaching studio. Olsen has also taught music history and theory to undergraduates at Stony Brook University in New York.

In addition to teaching and performing, Olsen also serves as an adminstrator at the International Keyboard Institute and Festival at Hunter College in New York City.

A native of Renton, Washington, Olsen holds a Master's degree and Graduate Diploma from the New England Conservatory and a Doctor of Musical Arts degree in piano performance from Stony Brook University. He earned his Bachelor of Music degree in piano performance from Western Washington University in 2004. His most influential teachers have included German Diez, Jeffrey Gilliam, Margaret Brink and Stephen Drury.