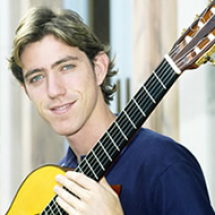 Sebastian Acosta-Fox was born in the small town of Bariloche, Argentina. His musical studies began at age 11 with the teachings of his father, also a guitarist. Acosta-Fox received an Associates in Arts degree from Miami Dade College where he studied guitar with Jose Adan. Upon completion Acosta-Fox transferred to the Florida State University where he completed a B.M. in guitar performance under the guidance of Bruce Holzman.

In 2005, Acosta-Fox became the first prize winner of the prestigious MTNA guitar competition. That same year he was invited to perform alongside Luciano Pavarotti at the Bank Atlantic Center, South Florida.

In recent years, Acosta-Fox has performed with the Florida Grand Opera, The Cleveland Orchestra, and the Palm Beach Symphony.