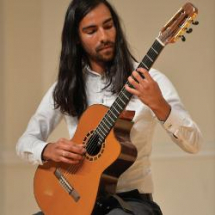 Santos Salazar is a guitar and piano instructor in the Washington, D.C. area. Well-versed in multiple genres, he believes versatility is key to a comprehensive musical experience.

Santos' first musical instrument was the piano, though he also learned violin and cello at a young age. However, it wasn't until he picked up a guitar at 13 that he felt he'd found his calling. He studied Jazz guitar at Montgomery College for 2 years, but ultimately chose to pursue a Bachelor's in Classical Guitar Performance at Coastal Carolina University. He is currently finishing his Master's Degree in Classical Guitar Performance at Towson University. Influenced by Joe Pass, Slash, Chopin, Debussy, Linkin Park and more, Santos is very interested in not only expanding his repertoire but also expanding his knowledge in order to further progress his original music. Santos has been composing instrumental, singer-songwriter, and full rock band music since he began playing the guitar. He has performed as a solo artist, a singer-songwriter, and a classical guitarist locally in the D.C and Baltimore regions. He has also performed as a duet, trio, and full band and has experience with collaborating with others on stage, during rehearsals or in the recording studio.

A teacher of all ages and abilities, Santos first began teaching guitar among his friends and family before graduating to his own private students. Preferring the Suzuki method, he encourages students to choose the music they most want to learn and modifies the path to best suit their needs. He is most excited about helping his students achieve their goals and musical aspirations in order to preserve music in the younger generations.

In addition to guitar, Santos also teaches piano, which he never stopped playing. He believes it has the ability to provide a foundation for many musical avenues, and enjoys teaching students from beginner through intermediate levels.

Believing that music truly is universal, Santos loves that there is a song or musical theme that is relevant to every situation. The impact of being able to communicate with others in a language that anyone can understand inspires him, and he strives to ignite that same spark in his students.