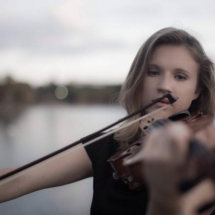 Samantha Dahl is currently studying with Julliard alumni and
internationally renowned performer Dr. Ayako Yonetani as a music
performance major at the University of Central Florida. She began
playing viola when she was 10 years old in her elementary school music
program. She studied with Carey Moorman for 7 years before she
moved to Orlando.

She was a member of the Brevard Symphony Youth Orchestra for five
years and has performed with the Space Coast Symphony Orchestra
and Cocoa Village Playhouse. Samantha also underwent a rigorous
audition process each year beginning at age 13 and was accepted to
both All County and the Florida All State Orchestras every year from
2009-2014. Her teaching experience began in the summer of 2013 with
an internship at a summer camp for young players and continued in
2014 with the Brevard String Academy, at which point she also began
private lessons with young students. When she is not playing or
listening to music, Samantha enjoys reading, watching movies, and
horseback riding.