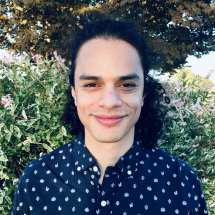 Sage Khoury is a multi-instrumentalist and music producer with nearly two decades of experience playing in bands and recording. He is currently a gigging musician, primarily playing guitar with various local acts. Aside from playing live, Sage also produces music for local artists and as a pianist, Sage uses his skills to compose and arrange music in genres ranging from pop, rock, R&B and rap. Sage is also a competent drummer with performance experience and an impeccable sense of time.

Growing up in Monroe, WA, Sage decided at age 12 he wanted to learn to play guitar after seeing the film “School of Rock”. His mother rented him an electric guitar and told him he could keep it as long as it never collected dust. Sage quickly became obsessed with learning the guitar and began to play entire albums by his favorite artists like “Dark Side of the Moon” by Pink Floyd. Seeing how motivated Sage was, his mother purchased the rented electric guitar for him as a birthday gift.

Shortly after starting the 6th grade, Sage began taking one-on-one lessons with teacher and virtuoso, Greg Norgaard. A highly experienced educator who has taught over 5,000 students. During his four years of training with Norgaard, Sage learned music theory, proper technique, sight-reading and ear training. Sage excelled especially at improvisation and finger picking. Greg Norgaard noted that out of the 5,000 students he taught, Sage was one of the most creative players he taught.

To Sage, teaching music is an excellent way of giving back to the community. Having had a great teacher himself, Sage would be honored to share the gift of musicianship with new players.