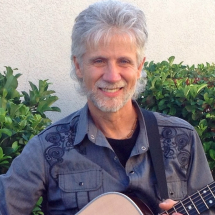 Richard Lucchesi has been teaching guitar, mandolin, baroque recorder, bass, ukulele, and music theory to all age groups for many years. Each lesson incorporates aspects of reading, performance, interpretation of the music, repertoire, and an emphasis of the enjoyment and fun of the instrument with the goals of the student in mind. He has had experience teaching in studios, churches, and private home settings.

Richard’s education includes composition and guitar performance at the University of Nevada, Las Vegas, and private instruction. In addition to electric and acoustic guitar, he also plays classical guitar, mandolin, tenor banjo, synthesizer, harmonica, ukulele, and baroque recorder. He is also a full member of the Registry of Guitar Tutors of the London College of Music.

Richard maintains an active performance schedule and continues to write music for all of the instruments and musical genres he performs and enjoys in both solo and ensemble settings. His musical journey started with trumpet and baritone horn in elementary and junior high school years, moving to guitar in high school, and then hitting the road with bands soon after. His musical travels brought him to clubs, hotels, and stages across the country including everything from the “Strip” in Las Vegas to the Grand Ole Opry in Nashville. Along the way, he also had the great experiences of opening for groups such as Diamond Rio, Lonestar, Wade Hayes, Kenny Rogers, and many others. He has performed a variety of genres including classical, rock, jazz, country, ragtime, Celtic, blues, free jazz improvisation, ambient, world, acoustic folk and Americana, bluegrass, funk, and gospel. He maintains an active live schedule performing guitar and vocals in a modern country and rock variety cover band. He performs as a synthesizer/keyboardist, harmonica player, and contributing song writer in an instrumental world-music ensemble as well as a mandolinist and contributing song writer in a mandolin trio. He also performs as an acoustic guitarist, mandolinist, vocalist and contributing song writer in an Americana/Folk group as “Peter” in a Peter, Paul, and Mary tribute group. He is also known for his help as a first-call sub for a variety band playing guitar or bass.