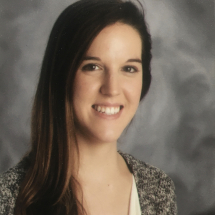 Rachel Sebastian discovered her love for music at a young age when her parents fulfilled her 6 year old life-long wish of starting piano lessons. Soon after, she began playing violin and French horn as well and discovered a passion for performing music as both a soloist and part of an ensemble. By the fifth grade, she knew what she wanted to be when she grew up– a music teacher.

At the age of sixteen, Rachel began teaching piano lessons to neighborhood kids and often organized recitals for them to play in local nursing homes. Bringing meaning to other people’s lives through music became her passion, and she sought to do that through both performing and teaching. During high school, Rachel performed as both the assistant principal and principal horn in the Louisiana All-State Band, the assistant horn in the All-South Honor Band, and also performed alongside the Louisiana Philharmonic Orchestra on various occasions. She continued as a piano soloist and received recognitions from the Piano Technicians Guild as well as the Louisiana Music Teacher’s Association.

Upon graduating high school, Rachel received a full scholarship to perform French horn and earn her Bachelor’s Degree in Music Education from the University of Maryland. During her time there, she performed as principal horn in the University of Maryland Wind Ensemble and as a rotating musician with the UMD Symphony Orchestra and Wind Orchestra. Her love for teaching different instruments expanded as she took pedagogy and methods classes for strings, percussion, brass, and woodwinds.

Rachel graduated magna cum laude in 2014, having received the University of Maryland School of Music’s Presser Award — a recognition given to only one student each year based on outstanding academic and musical achievement. Rachel has been an active private lessons instructor since 2008, and since 2016, has been giving students the creative outlet of instrumental music classes in public schools. Her students would describe her as an exceptionally caring and patient teacher who always knows how to make learning fun. She explores creative means of engaging students in music using composition, theory, and a variety of styles and genres in her teaching. She believes that music is a powerful tool for self-expression, healing, and authentic living.