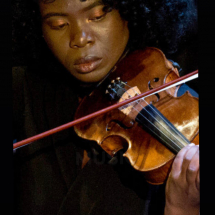 Promise Ashu is a graduate of Rutgers University where she studied violin performance at Mason Gross School of the Arts. Originally from Prince George's County, Maryland, she started her training at the age of 8, after being gifted a violin.

Through teaching herself to play by watching Youtube tutorials, she was able to audition and attend Duke Ellington School of the Arts in Washington, D.C for her high school education. There, she received her first formal lesson at the age of 14. Although she had what some would consider a late start, she did not let that stand in the way of her goal of being a professional violinist and educator. Her gift has taken her to concert venues all around DC, Maryland, and Virginia such as The Kennedy Center, the Strathmore, and the Lincoln Center with the likes of artists such as Ledisi, Sting, Paul Simon, and Bobby McFerrin. She has also participated in masterclasses with artists such as world renowned cellist, Yo Yo Ma, and violinist Hirona Oka.

As an active instructor, Promise teaches Violin, Viola, Cello, Voice, and Piano. The latter 2, she developed while at both Duke Ellington and Rutgers University. She works with students of all ages and believes in developing the ear as an important basis of study. With strings students, she utilizes a combination of Suzuki and Traditional methods. For piano, the Faber series, and with voice students, progressive exercises and repertoire.

In addition to teaching/performing classical music, Promise also enjoys playing and singing as a studio artist in using various styles, such as jazz, r&b, and folk/story telling music. Promise believes that music is all around us, and as long as there is a curiosity and willingness, growth is inevitable!