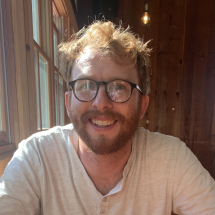 Owen is multi-instrumentalist, singer and songwriter from the Pacific Northwest. He began his musical education at the age of five with piano lessons before adding the guitar three years later. In 5th grade he chose to take band and came home from school with a dented rental trombone. This desire to learn and discover never let up, and since then, through middle school, high school, college, and a career as a gigging/session musician in Seattle, he has developed and cultivated a deep passion for creative expression, both musical and otherwise.

From 2010 to 2014, Owen attended the University of Montana where he studied jazz guitar performance. During that time he toured around the state in the school’s top jazz band, studied in the classical guitar studio, played trombone in the 2nd Jazz Band, and kept a full calendar on the weekends playing gigs with his funk rock group. Since graduating and returning home to Seattle, he has found his place in the thriving music scene, performing with such artists as Kate Dinsmore, his band The Hasslers, and local country western singer Gus Clark. He is also a strong composer, arranger, and songwriter, having taken on such duties in the above bands and many others.

Owen first began teaching in college, helping out a freshmen from his old high school try out for the jazz band. That experience of helping a student reach his goal stuck with him, and he knew then he would always be eager to help others on their musical path.

To Owen music is not only a joy, but a passion, a language and communication tool, an adventure, and even a safe haven where one can escape to process and ruminate on their life and the world around them. Because of these benefits, he finds great joy in – and understands the importance of – passing on his knowledge and love of music to new musicians, no matter the age. His approach to teaching is easy going, fun, and comprehensive. He knows that music manifests itself differently in each student and strives to encourage those unique elements to grow and flourish.