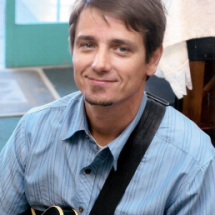 Neal Adams is a teaching and performing guitarist who encourages students to have fun and work hard. He understands that having fun with music lessons, combined with smart practice, and sharing it with others, helps to build character, social skills, and helps the individual find their personal role in the arts.

As an educator, Mr. Adams has instructed many beginning to advanced students and enjoys helping them to achieve their musical goals whether it’s starting a rock band, playing solo guitar, or preparing for a university audition. Mr. Adams has had students who performed with the Jazz High School Honor Band, accepted to the North Texas University Music Program in 2011, as well as the U.S.C. Thorton School of Music in 2014. He enjoys helping students to discover how they can perform and appreciate the music they like as well as other styles of music and it doesn’t matter if it’s up on the big stage or out in the garage band.

Neal has been teaching the guitar for 16 years. He is a graduate of the Berklee College of Music in Boston, Massachusetts where he received a Bachelor of Music in Jazz Composition and studied the guitar in classes, workshops, and performances with many great musicians including trumpeter, composer Greg Hopkins, guitarist Mark White. There he received the, “Berklee Achievement Scholarship,” and a scholarship from, “The Friends of Jazz.” More recently Mr. Adams continues to teach, study, perform, and compose and has been working as a freelance performer and has performed in a variety of musical settings and styles such as jazz trio, soul, funk, rhythm and blues band, and musical theatre. He is currently studying with Ron Eschete privately and working on the Keith Larsen Neal Adams Project , as well as with The Dan Vu Trio and Indigenous Soul recording and performing standard jazz and original music.