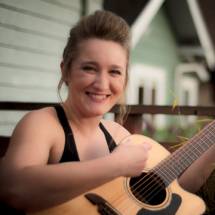 Naomi Botkin has always found joy in singing and thrives on her work as a professional vocalist, songwriter, sound engineer, and voice teacher. She sings lead and backup vocals for Sonic Funk Orchestra, an award-winning Puget Sound disco funk show band. She also performs and composes lead vocals and rhythm guitar for Tigers in the Tank, an indie pop rock band. For four years Naomi has hosted the weekly Wednesday open mic at the historic Blue Moon Tavern in Seattle, where she loves to contribute to a safe space for all to cultivate performance art. As a solo artist, you can find her performing as "Nomi" on acoustic guitar in coffee shops, restaurants, farmers markets, assisted living homes, art galleries, music festivals, and nightclubs all over the Pacific Northwest.

Sing-alongs and songwriting blossomed in Naomi from her earliest memories. Her parents moved to the Puget Sound from Louisiana and Oklahoma, and inspired her early on with their earnest and soulful (if not always polished) southern vocal stylings. From elementary school onward Naomi embraced every choral opportunity she could. She competed in vocal competitions, studied advanced music theory, and made her theatrical debut as a blue-sequined backup singer in "The Wiz." She performed in Carnegie Hall with a high school choir and traveled all over the Puget Sound region to perform and compete with a small jazz ensemble. She graduated from Colorado College in 2007 with a B.A. in Drama and a minor in French. While at CC, she participated in over 20 theatrical productions and gained experience in all aspects of theater. She also spent a semester in Avignon, France, and interned at the Opéra Théâtre d'Avignon.

Naomi is passionate about serving equity and wellness for her community in all that she does. She earned a Masters in Public Administration from UW in 2012 and exercises her administrative prowess to support independent female-owned businesses, manage her own music career with integrity, and volunteer for local nonprofits. All of these experiences feed into her songwriting, and she loves to inspire others to harness the power of their feelings into song.

What You Need To Know About Online Voice Lessons