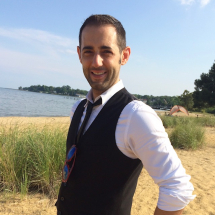 Mike Ounallah comes from a varied and vast array of musical experiences. He has a bachelor's of music in jazz studies from UNC Wilmington and a Masters of Music in Jazz Studies from the University of Maryland. A highly trained performer on classical and modern piano as well as traditional and contemporary drum set and percussion give Mike an edge in his teaching abilities.

Mike has been playing drums and percussion for over 25 years, piano for around 15, and has been studying voice for almost a decade. During his time in school, Mike performed in a number of different groups. He has played in situations as varied as Orchestra, Big-band, African Drum Ensemble, Percussion Ensemble, Combo Jazz Groups, Gamelan Orchestra, Afro-Cuban Ensembles, and Mallet Ensembles. He also performed in freelance rock, jazz, jam, and improvisational groups.

Mike began playing at age 7 on both piano and drums and started performing at age 14. Later he studied voice in college and picked up the banjo as another instrument to have in his repertoire. Currently he not only spends a good deal of time practicing and writing but also learning modern styles of music making such as Logic Pro and Ableton. As a writer, arranger, and performer Mike has recorded and written for 10 albums and played as a freelancer on countless more. His studies have exposed him to Classical music, World music, Jazz, Contemporary styles, Pop, Rock, Bluegrass, Americana, Funk, R&B, and Hip Hop. This ability to switch between instruments and incorporate modern techniques of music making are essential to his teaching philosophy. From beginner piano, drums, and voice to advanced styles Mike can cover the gamut of musical goals for any age.

Since graduating with a Masters in Performance, Mike has toured the country and abroad in several working groups that have played large festivals, clubs, venues, and notably the Kennedy Center, Strathmore and Presidential Luncheon at the White House. It is this experience, that gives Mike an edge and understanding of what it takes to not only succeed in an academic setting but also in a 'real world' situation.

Studying under great teachers himself, has given Mike the tools to design lesson plans specific to the student and be attentive to each students needs. Being a teacher of close to 25 years of all ages, he understands what it takes to make lessons fun, engaging, and all around great musical experience's that keep his students motivated and excited to get better on their instrument.